“Always carry a cross!” The monk instructed him, “Never go anywhere without it. Never do anything without signing it with the cross first: sitting down, laying down, opening a drink, anything!” With that, he promptly signed the cross where the two of them would sit…

Little did the youth know how the story would become real… 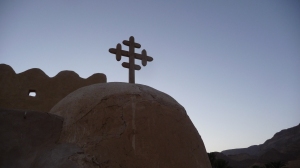 Walking in the Desert Series

“What time will you visit us?” Asked the Youth’s aunt.
“I’ll come on the last train, I want to spend a little bit of time with my friends at Church.”
“See you, soon.” She replied.

We meet yet another youth who has been touched deeply by his time spent in monastic retreat. It was in the monastery that he felt the life of the Church enter into his soul after his first encounter with His God. He had been spending his summers in retreat, but was balancing his time between the monastery and his family during his summer holiday. He longed to traverse the roads and paths that cut through the ancient monastery of Saint Antony, but reality had pulled him to his ‘worldly obligations’. Still, in his head, he would go for walks in his monastery and recall the conversations and lessons he had learned from the Abbas.

“Always carry a cross!” The monk instructed him, “Never go anywhere without it. Never do anything without signing it with the cross first: sitting down, laying down, opening a drink, anything!” With that, he promptly signed the cross where the two of them would sit. “Do you know what the first story in the [Arabic] Paradise of the fathers is? It’s a monk who was forced to spend the night in the wilderness, and so he signed the cross in all directions. When he woke up, he found scorpions surrounding him but unable to cross over to him because of the cross that had been signed.”

The youth was mesmerised. Really, could the cross hold so much power? If it was so powerful, why weren’t people using it? He meditated on this, but did little with it.

“I always carry the cross,” continued the Abba, “In fact, I hold it tightly while I sleep. Once, before I entered the monastery, one of my family member’s saw that I was sleeping with it, and tried to take it from my hand. But even in my sleep, I held my grip tighter and refused to surrender it. Never surrender your cross.”

Now, in the world, the youth patted his pocket for the familiar feel of the cross. A few hours earlier he had the conversation written above with his aunt. She lived in a small town in the governorate he was visiting. He was going to visit her, but was in no rush. He had decided to take the last train out to see her, which was his usual custom. Always, he would arrive at the train station, and the train would be parked at platform 1. It would then reverse and move forward again to depart from platform 4. Most people would board from platform 1, but this youth liked to board from platform 4. It was like an exercise of patience for him.

Tonight, though, was different. Tonight the youth was tired, and was hoping to sit down sooner. He boarded at platform 1, and was surprised that the usually empty train was filled with military personnel. Perhaps they are finished a military holiday period or something… Certainly, it seemed peculiar. He seated himself in the third-class compartment beside where there should be a door. The door, however, was conspicuously absent. It was third-class after all.

The train began to move in reverse, as was its custom. Any moment, thought the youth, and it would change direction and head toward the opposite direction and stop at platform 4. It didn’t. It began to speed in the ‘wrong’ direction much more rapidly.

Oh no! Thought the youth, “I’m headed toward the next governorate! My aunt will think I’m lost when I don’t arrive on time!” The next governorate was a 2 hour train ride, but the stop to his aunt’s town should only have taken about an hour or so. This was before everyone had a cell phone, and the youth had no way of alerting his aunt about the reason for his delay. Worse than that, was that by the time he arrived in the next governorate, there would be no train returning to where he left from. When he would be missing, surely his family would alert the authorities. The scenario was not ideal.

Yes! The cross! He was aware of it. Silently, the boy prayed, asking God to help him in his predicament, and adding an extra request to his intercessor to be with him. With the faith of a mustard seed, the youth took his cross and signed the opening of the train where the door should have been, three times.

The train began to slow down. Slower and slower was its speed that the youth realised he could jump from the train, and with some knowledge that he should do that, he jumped off. Immediately when he hit the ground, the train immediately sped up and was gone within seconds.

He found himself in front of a farmer’s town. This was upper Egypt, where the farmers slept early and rose early. The town looked and felt abandoned. The youth started walking around, but not a soul was on the streets. In his mind, he chided his intercessor, “It was very kind of you to help me get off the train, but it’s not helpful to me if I’m stranded here!” The same internal knowledge that alerted him to get off the train, commanded him to turn around. He turned around and saw in front of him a church. It was closed, like everything in the village, and the lights were off. Yet, the light of the streetlights illumined the door, and he saw with joy an icon of his intercessor, as though to tell him, “You’re cared for; don’t worry.”

The youth continued to walk in that direction. As he walked down the street he saw in a corner an elderly man sitting on the steps of a small apartment as though waiting. The youth opened his mouth to ask the old man where to go if he needed a lift, but he had no sooner opened his mouth that he saw the old man was already pointing his finger toward an alley.

Somehow the youth was not surprised to find that a man stood leaning against an SUV, as though waiting as well.

“Do you need a lift?” The man asked.
“Yes, please.” Answered the youth. “I’m hoping to go to…” and told the man where he was going.
“That’s actually where I’m heading,” said the man, “so just hop in. Don’t worry about payment.”
How peculiar, thought the youth.

Twenty minutes later, the youth found himself at the same train station. It was precisely the time where he should have arrived by train at his aunt’s town. He went to the phone station and called his aunt.

“Yes, I’m sorry. Something happened and I missed the train heading to you. I’ll take a microbus and come to you.”

That simple. As though nothing had happened.

Yet, much had happened.

The Cross is powerful in the hands of them who believe, but it is foolishness and idle tales to those who mock. The desert fathers were right in their conviction about the cross, and here, that youth’s walk in the desert had been brought to life in the city.

A year later, he sat with the same Abba and recounted the story.

“Yes, beloved one, how wonderful is this story. But remember that this is nothing for you to boast, because it was His love and grace and the power of His cross that delivered you. Say like Saint Paul, ‘God forbid that I should boast, except in the cross of Jesus Christ.‘”

2 thoughts on “A boy, his cross, and his intercessor.”

This site uses Akismet to reduce spam. Learn how your comment data is processed.

Thoughts & Meditations of an Orthodox Christian